HOUSTON, May 12, 2021 /PRNewswire/ — AmCap Home Loans announced today the launch of a multi-year brand ambassador sponsorship of PGA Tour player and Houston resident, Roger Sloan. The strategy will see Sloan displaying the AmCap logo on his golf shirt and tour bag at PGA Tour events. The sponsorship is the first of its kind for AmCap as the company seeks to leverage the PGA Tour demographic in an effort to broaden its brand profile and industry footprint as a leader in the home mortgage and refinance sector.

CEO Garrett Clayton noted, «When Roger broke the course record at The Clubs at Houston Oaks, I knew this was an athlete with phenomenal potential, much like AmCap where we are on the verge of becoming one of the premier home lending companies. With this determination and work ethic in common, we are excited to partner together as we both go from being good to great.»

Both AmCap and Sloan make their headquarters in Houston, Texas, and while AmCap and Sloan are busy working across the nation, they agree there is really no place like home. In 2019, AmCap helped the Sloan Family achieve the American Dream of homeownership, so Roger contends, «I have never been more aligned with the core values of a company. The entire AmCap team helped guide my family through the home purchase process. Their commitment to customer service and industry expertise allowed us to rest easy knowing we had someone taking great care of our home loan needs. Combine their business model with their charitable initiatives and I have a lot of pride being a part of the AmCap team!»

Roger Sloan is currently in his fourth season on the PGA Tour.  Roger Sloan has won at every level he has competed, including two worldwide victories.  Recently, Roger shot an opening round 62 at The Wyndham Championship which proves he is primed to win on the PGA Tour.

AmCap Home Loans is a major sponsor of The Houston Open for the second year in a row. This year the tournament will be held on November 11-14th at Memorial Park Golf Course. Funded by the non-profit Astros Golf Foundation, the $18.5 million renovation project has produced the promised world-class golf course for all Houstonians to enjoy. As a result of these improvements, the PGA Tour’s Houston Open has returned to Memorial Park for the first time since 1963. We look for to cheering Roger on all year, but especially this November on our home field 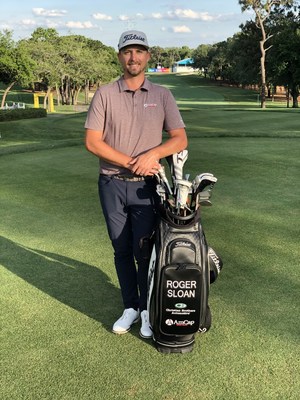