NARITA AIRPORT, TOKYO, Japan, July 28, 2021 /PRNewswire/ — After several weeks of international legal wrangling, Siphiwe Baleka finds himself marooned at Tokyo’s international airport, after his bid to compete in the Men’s 50-Meter Freestyle on July 30 was denied by the Fédération Internationale De Natation (FINA), the international governing body of competitive swimming. 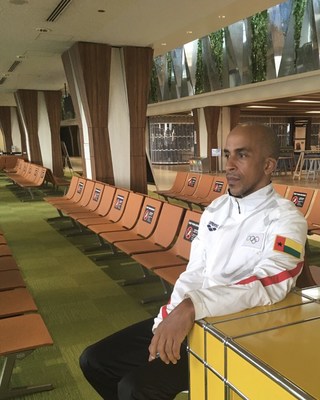 Baleka, who is a dual citizen of the United States and Guinea-Bissau, is now one of several Black competitors whose Olympic dreams have been dashed by their respective sports’ governing bodies. A source says that Baleka is at Tokyo’s Narita airport, where he has languished since arriving in Tokyo on Sunday, July 25. He arrived there on Sunday, awaiting a final decision on his case by the international Court of Arbitration for Sport (CAS), based in Switzerland. The Court dismissed his case after his arrival in Tokyo, but provided no rationale for the denial. Baleka’s qualifying time was among the top 10% of so-called Universality Place contestants. Universality Places are intended to level the playing field for smaller countries and newer programs attempting to field teams at the Olympics.

On Monday, the CAS arbitrator denied Baleka’s appeal of FINA’s earlier denial. The reasons given by FINA to oppose Baleka’s Universality Place application included an unpublished one-year residency requirement that Baleka says was never disclosed to him or to the Guinea-Bissau Swim Federation, and an unsubstantiated Universality Place qualification deadline of July 20, which FINA says Baleka failed to meet, though FINA’s published deadline was July 27.

Baleka penned the following «Letter From a Tokyo Airport» where he is currently sequestered, unable to leave the airport and unable to return to his home in Guinea-Bissau until he receives confirmation of his COVID-19 status. The letter states:

«I am confined in the Narita Airport in Tokyo, Japan. A decree from the Fédération Internationale De Natation (FINA), the international governing body of competitive swimming has kept me from representing my ancestral homeland in the 2020 Olympic games in Tokyo.

«Despite having qualified to compete in the men’s 50-meter freestyle on July 30, under the published Universality Place rules, FINA has violated its own rules and refused to allow me to compete. My appeal to the Court of Arbitration for Sport (CAS) has been dismissed and the Japanese Olympic Committee officials revoked my Pre-Approved Verification Card (PVC) that is required for entry into Japan. Thus, I have not been allowed to leave the airport since my arrival on July 25, not even to take a PCR COVID test without which I cannot leave the country. Unable to enter or leave Japan, I find myself stuck here in Terminal 1, Departures, at the Narita Airport.

«Nearly 250 years ago, my 4X great grandfather was kidnapped as a boy from his homeland in West Africa. Today, that place is called the country of Guinea-Bissau. Like most Afrodescendants in the western world, my ancestor was trafficked across the Atlantic Ocean and enslaved in the Americas. This dehumanizing process resulted in my family suffering several generations of ethnocide in the United States of America, not to mention all kinds of discrimination, police brutality and other injustices. My own cousin, Jacob Blake, was shot seven times in the back by police in Kenosha, Wisconsin, while his three sons watched. Jacob has told me, from his bed in Wisconsin, that he hopes to make a home with his children in Guinea-Bissau once he has recovered enough to travel.

«After taking a DNA test and discovering my Balanta tribal ancestry, I sought to learn the language that the legacy of American slavery prevented me from speaking and became a citizen of Guinea-Bissau. Though I had graduated from Yale University, become a successful entrepreneur and fitness guru, I was fed up with the never-ending indignity of being black in America. I was sick of the danger and violence of white supremacy. Thus, I left behind my family, my business – everything – seeking a country and a home.

«With the encouragement of government officials, I worked with locals in Guinea-Bissau to create the Guinea-Bissau Swim Federation, and to compete in these Games as a competitor under the Universality Place rules which, based on all of my communications with FINA, we adhered to by the letter. Unfortunately, the ground shifted underneath me time and again.

«After being invited by the Guinea-Bissau Minister of Sport to represent Guinea Bissau in the Tokyo Olympics, receiving Guinea-Bissau citizenship, and traveling to Tokyo, I was ready to fulfill this great honor and become the first Afrodescendant from the United States to represent their ancestral homeland in the Olympics as the oldest swimmer in Olympic history. Longer term, our plans include building out a competitive National Swim Team to field robust teams for Guinea-Bissau in future Olympiads.

«Throughout my life and struggles in this world, I have held on to two hopes – the triumph of my own Olympic Spirit and restoration to my ancestral homeland. My experience, however, has shown me that the Olympic Charter and Spirit is perhaps not, after all, a celebration of the joy of athletic achievement, fair play and social responsibility.

«Instead of competing in two days, representing the land from which my ancestors were stolen, I am stuck in Terminal 1 of the Narita Airport in Tokyo, Japan. Meanwhile, other Black athletes fight to wear their natural hair during their races, or contend with debilitating psychological and other stressors, while simply trying to do their best for their country and their teams. I pray for their success, but also for their mental and physical well-being.»

Baleka is scheduled to return to Guinea-Bissau soon, pending a negative COVID-19 test. Despite his own misfortunes, Baleka states «I hope that my experience will start a movement of Black Americans competing on behalf of their ancestral homelands.»