TEGUCIGALPA, Honduras, May 18, 2021 /PRNewswire/ — The fight against transnational crime and corruption have been a fundamental pillar of the integral plan of government of President Juan Orlando Hernández with the support of allied governments and the strategic cooperation of the United Nations Office on Drugs and Crime (UNODC). 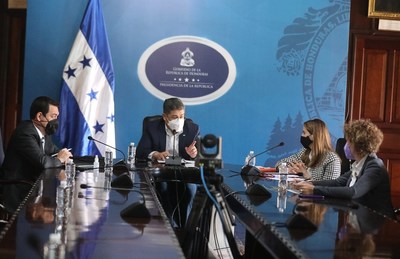 In 7 years, the Hernández administration has achieved important milestones in terms of security, such as the fight against drug trafficking, gangs, the strengthening of security entities, the construction of maximum security prisons, the approval of laws aimed to weaken the financial structures of the drug cartels and gangs, and the approval of the Extradition Law, which facilitated the dismantling of the drug cartels and the reign of terror that they had established in the country and have propelled a drastic reduction of homicides in the country

«We accept and appreciate the commitment to support Honduras in its efforts to build effective, accountable and transparent institutions. I am sure that we are going to win this war against corruption and transnational crime,» the Honduras President said. «We lowered the homicide rate from 90 to 37 per 100,000 inhabitants and there is evidence that drug traffic has significantly reduced in the last 4 years,» Hernández explained.

The country has showed a substantial decrease in the reduction of drug trafficking through its territory under the Hernández Administration. The 2020 International Narcotics Control Strategy Report (INCSR) of the US Bureau of International Narcotics and Law Enforcement Affairs estimated that «approximately 4 percent, or 120 metric tons (MT), of cocaine shipments from South America made a first stop by air or by sea in Honduras in 2019, though more is assessed to have transited through Honduras by land after making a first arrival in other countries.»

This finding reveals a significative reduction in the last years of drug traffic passing through the Honduran territory when compared to the 2013 INCSR report which indicated that as much as 87 percent of all cocaine smuggling flights departing South America first landed in Honduras.

Hernández said that thanks to these substantial results that his administration has achieved, Honduras is no longer the most violent country in the world. «Furthermore, we have become an attractive country for foreign investment and tourism» Hernández stated.