OTTAWA, ON, July 27, 2021 /CNW/ – Karen Van Nest (North Bay, ON) is set to compete in her sixth Paralympic Games this summer, as she was named as Canada’s representative in the sport of Para archery for the upcoming Tokyo 2020 Paralympic Games, announced the Canadian Paralympic Committee (CPC) and Archery Canada. 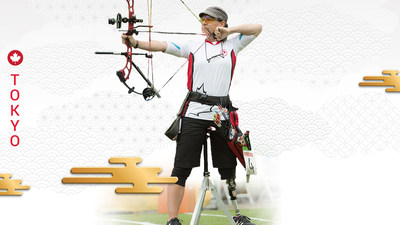 Van Nest, 58, earned the qualification slot for Canada in March of this year, when she earned a silver medal at the Pan American Championships in Monterrey, Mexico. Most recently, she made the round of 16 at the Para Archery World Ranking Tournament in Nove Mesto nad Metuji, Czech Republic.

Currently ranked No. 27 in the world in the women’s compound open, Van Nest posted two Top 10 finishes at the Rio 2016 Paralympic Games. Tokyo will be her third consecutive Games participating in Para archery. Before then, she competed in Shooting Para sport, making her Paralympic debut at Sydney 2000 and then switching to archery after the Beijing 2008 Paralympic Games.

«This will be my sixth Games, and it is always an incredible feeling walking into a stadium representing your country at a Paralympic Games,» said Van Nest. «I’m excited to be finally traveling to Tokyo in August.»

Van Nest will be in the line-up for the women’s compound open in Tokyo, which will be contested on August 27, 29, and 30.

«The opportunity to work with Karen and so many other great Para archery athletes has been incredibly enriching,» said Duncan Crawford, Paralympic Team head coach, Archery Canada. «I’ve learned so much as a coach in these last few years, to have athletes achieve their goals and to be there to support them at the highest level of international competition is reward in itself.»

One of the original Paralympic sports, having been included at the Stoke Mandeville Games in 1948 (the forerunner to today’s Paralympic Games) and the inaugural Paralympic Games in 1960, Para archery features compound and recurve bows. There are wheelchair and open categories based on an athlete’s classification, and the competition format and rules are almost identical to that of the Olympic Games.

«I am so thrilled to welcome Karen to Team Canada for a SIXTH Paralympic Games!» said Stephanie Dixon, chef de mission, Tokyo 2020 Canadian Paralympic Team. «That is a remarkable accomplishment, and a sign of Karen’s commitment to sport, her talent, hard work, and dedication. I wish Karen all the best in Tokyo.»

The postponed Tokyo 2020 Paralympic Games will take place August 24 to September 5, 2021 in Japan. Canada is expecting to send a team of approximately 130 athletes, and audiences across the country will be able to follow all the action live through coverage from the Canadian Paralympic Media Consortium, including broadcast partners CBC/Radio-Canada, AMI, and Sportsnet, and digital partners Twitter, Facebook, and MXZN.

About the Canadian Paralympic Committee: Paralympic.ca