COVINGTON, Ky., May 10, 2021 /PRNewswire/ — VIVE Hard Seltzer, a widely-recognized regional power player in the highly competitive hard seltzer category, has announced its long-anticipated launch into H-E-B markets. Ohio’s leading regionally crafted and produced hard seltzer will soon bring its first-of-its-kind Fruit Punch Hard Seltzer Variety Pack to Texas store shelves, taking another bold step into the adult beverage industry. With a commitment to quality of ingredients, purity of flavor and authenticity, VIVE PUNCH will be available beginning this June at an SRP of $15.99 for each 12-pack of naturally sweetened flavors like Original Punch, Southern Punch, Sunrise Punch and Tropical Punch. 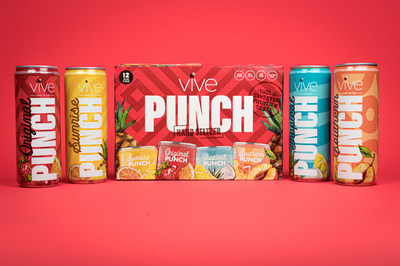 VIVE has single-handedly helped to shape the hard seltzer category. With the legacy of nationally acclaimed Pumpkin Spice Hard Seltzer at the brand’s back, VIVE is entering the Texas market by offering something that deviates from the norm: VIVE PUNCH. In a survey of over 600 consumers, the VIVE brand found the nexus of fruit-based, sweet, sparkling beverages were preferred. Launching this new variety of the VIVE brand will make it the first and only carbonated, alcoholic punch on shelf.

«We’re incredibly proud of our ability to bring our new VIVE PUNCH to Texas. The hard seltzer category is highly competitive, and we just knew we needed to continue to innovate BIG and put the product into the hands of consumers who think BIG, too,» shares Jake Rouse, Co-Founder and CEO at Braxton Brewing Company. «Each of the four PUNCH flavors deliver exactly what the name promises, from Original Punch to Tropical Punch, and we’re excited to ‘wow’ our new Texas fans with this launch.»

Braxton Brewing Co., the maker of VIVE, was recently identified as an Inc. 5000 fastest growing private company based on its unprecedented three-year growth. Propelled in part by the launch of VIVE’s seasonal variety, Pumpkin Spice, Evan Rouse, Co-Founder and Chief Product Officer, was honored in Forbes’ «30 Under 30» 2021 list. Meanwhile, VIVE was also recently marked as the hard seltzer generating highest velocity among non-national competitive counterparts in the Midwest. Armed with this knowledge, the brand has continued to compete at the national level, with hard seltzer brands with deeper pockets, broader resources and more consumer recognition.

About VIVE Hard Seltzer
VIVE Hard Seltzer began as a simple idea. An idea to create a beer-alternative that would inspire, motivate and stir a shift in the way we move. Something light, crisp, refreshing and not too heavy. After more than a year of experimentation, VIVE was born. Cincinnati’s first locally crafted hard seltzer comes in 8 refreshing flavors, is easy to drink, gluten free and all natural with only 100 calories and two grams of carbs, it’s the perfect drink to help you live it up. In 2020, VIVE was named as a key regional velocity power player by Nielsen, having dominated hard seltzer sales in Midwest, as compared to its competitive counterparts. Braxton Brewing Company, VIVE’s partner company, also recently earned the rank of 2051 on the highly prestigious 2020 Inc. 5000 list of the fastest-growing private companies in America.